After struggling with a creative block for many years, I decided to return to something I was really passionate about as a kid: writing and drawing comics. During school days, I had worked on a graphic novel with my class mates, which I’m now calling Team 4Pac. Even though it has an ending, some chapters in the middle were never finished. In 2020, I started actively working on those chapters and fill in the gaps. So far, I’ve completed 3 all new chapters.

Last week, I was finally able to upload the final pages of the chapter “Give me Liberty”, completing a project I had been working on for 18 months. For future reference and frankly, to get some closure, I want to look back at how that happened. This is a post about the realities of comic production! So it’s going to have a lot of numbers 😉

“Give me Liberty” has 38 pages, one of which is fully rendered cover art. The pages were sketched on my iPad in Procreate and used as a guide for the final pages drawn in pencil. Lettering has been done in Photoshop, plus there is an English translation. As of now, the pages are not colored.

In total, I spent 173 hours working on this chapter. I can’t tell how much time I spent on the story itself, which I had been marinating in my brain for years. But wait, 173 hours is not a lot of time? Why did it take me 18 months? In theory, even considering that I’m also a self-employed web developer, I could have worked on the comic part time and be done in 2 months! Let’s go back in time and find out.

I was on a roll: After uploading an all new chapter in early Janary, I had been uploading 2 old chapters per month with new lettering. That’s about 60 pages per month! At that pace, I would very soon need new chapters. But during these months, I was doing a lot of lettering and not much drawing.

For the April deadline, which I had set for myself, I wanted to re-release chapters 5 and 6. This included drawing two new pages, which should set the stage for the upcoming “Give me Liberty” chapter. To promote this update, I also wanted to add color to the cover art. I would miss the April deadline.

Two months after the last update, on May 12th, I uploaded chapters 5 and 6. I teased the next release for May 30th. I couldn’t tell you what I was intending with that 😄 I mean, I’m not sure when I started storyboarding “Liberty”, but there wasn’t a single finished page at this point.

Then, my actual job got in the way: The month of May turned out to be my most busy month of the year, with a huge project for a new client taking up most of my time. In June, I was working on 3 client projects in parallel. That didn’t leave me with much time and energy to work on the comic.

Things settled down a bit in July. My work load decreased, but I was quite exhausted. I started doing some storyboarding during this time. In August, I went on a much needed vacation for a reset.

I was ready to get back into concept work for “Give me Liberty”: On September 4th, being ambitious, I sketched the cover during my first ever Twitch stream. Most importantly, I decided to start drawing final pages, before finishing the storyboards for the rest of the chapter. I completed page 1 on October 6th!

From the 25th of October until the 7th of November, I had a good run, having drawn 5 more pages. Next up was a complex training montage. Storyboarding that took 3 weeks. Until December 14, I drew pages 7–12. It was going well now!

After the holiday break, I went back to the cover art, starting to ink and color the individual panels. Since it would be placed at page 13, it made logical sense to continue here. But I was soon getting lost in the details, obsessing over perspective and lighting, that I even modeled some of the panels using Blender to use as reference. I was starting to lose momentum.

Progress became slower and slower. By the end of March, the cover was about 70% done, but I was kind of burned out and tired of looking at it all the time.

At an artist meetup, I drew the last missing panel of the cover, shared my frustrations and got some much needed encouragement. I moved on. The following week, I was drawing new pages again.

In May, I traveled to Stuttgart for FMX and to get inspired some more, which never fails to work for me. It was still tough to get the ball rolling again, but I did do some storyboarding for upcoming pages.

I was finally fed up with my slow progress and proceeded to knock out a cool 11 pages!

I had another vacation planned, but I didn’t feel like taking a break from drawing! I even packed my drawing supplies. But in the end, it was good to take a break. I did sign up for Vienna Comic Con’s artist alley.

As soon as I got back, I started drawing pages again, because I really wanted to finish “Liberty” before VIECC in October. I also ramped up my social media posts, set up a newsletter and decided on my release schedule: I was going for 6 pages per week. As soon as I reached page 34, I scanned them in and published the first batch of pages on September 14th.

After that, things got really intense: I was scrambling to finish the cover art with the intention of having prints ready for VIECC on October 1st. There were some sleepless nights, where I worked until the sun set. But I found out how passionate I really was about all of this. In the end, I got the job done in time!

Which brings us to this month. Vienna Comic Con happened, which is a whole story in itself! The comic didn’t quite get done until then, but that was alright. I was finally publishing online on weekly basis! I drew the final 4 pages in a matter of days, scanned them, added the lettering and… suddenly, I was done.

The road to consistency

After all those twists and turns, I feel like I learned a lot about what works and doesn’t work for me. Drawing a comic is easy: Just don’t stop! Seriously though, getting started again after a break is always tough. Especially with years of my own accumulated expectations on what the final result should be.

So I feel the most important thing is to keep the momentum going. It’s important to do whatever I can to keep myself motivated. If something doesn’t feel right at the time, I can allow myself to continue with another part of the project instead. There were many weeks where I didn’t work on this project at all and I was feeling bad about it. It doesn’t have to be that way.

So what made me stop? The first time, it was probably the unrealistic schedule and being frustrated when I couldn’t meet it. Then, work came first and took too much of my time. The second time, I was getting hung up on details and forced myself to stick with a task I was getting tired of.

I think the whole process consisted of so much stop-and-go, that I was always reminded of how hard it felt to start again. Even after I had drawn a page recently, I thought it would feel that way again after just a few days. This feeling would sometimes hold me back for 1–2 weeks. Then of course, I would be right and re-starting would feel like a huge step again. But on the occasions where I drew a couple of pages in short succession, I would be proven wrong: It was actually fun and the quality of the work would be more consistent.

What worked for me

I think the most valuable result of the past 18 months, for me, was that I learned to set up a sustainable production schedule for myself. Not doing enough stresses me out, but setting my goals too high frustrates me. So I needed a good balance. I went from 60 pages per month to 26 pages per month or 6 pages per week. As long as I work ahead, this is achievable in my situation. What also helped me:

How to do better next time

These are my takeaways, which I also intend to follow for the next chapter:

All in all, I really like how this chapter turned out. The cover art is the gift that keeps on giving, being made out of 7 artworks that I can use to promote the comic. You can read the finished chapter here.

And with that, I’m off to create the next chapter!

Reels might be the hot new thing, but people are still going to visit your profile and look at your wall of posts.

Ever wanted to get creative with this grid and make posts spanning multiple tiles? It’s a bit old school, but great for big announcements or showcases, giving large projects the space they deserve.

So how can you do it? Cropping inside the app won’t be precise enough, so you’re gonna need a template!

The following template has the approximate borders of the Instagram grid built-in.

Requirements:
A version of Photoshop which supports artboards (at least CC 2015)

You can also get creative and hide the tile borders, by strategically placing your artwork:

If this helped you out, consider subscribing to my newsletter for more workflow tips and tool recommendations!

I just re-imported my old blog posts, dating back to 2006. It’s fitting, because this site is already an archive of my old stuff. Most of is still under review, but I can easily re-publish posts now.

Haven’t really written anything blog-like in 5 years, but who knows? Maybe I’ll post a project update here one day. 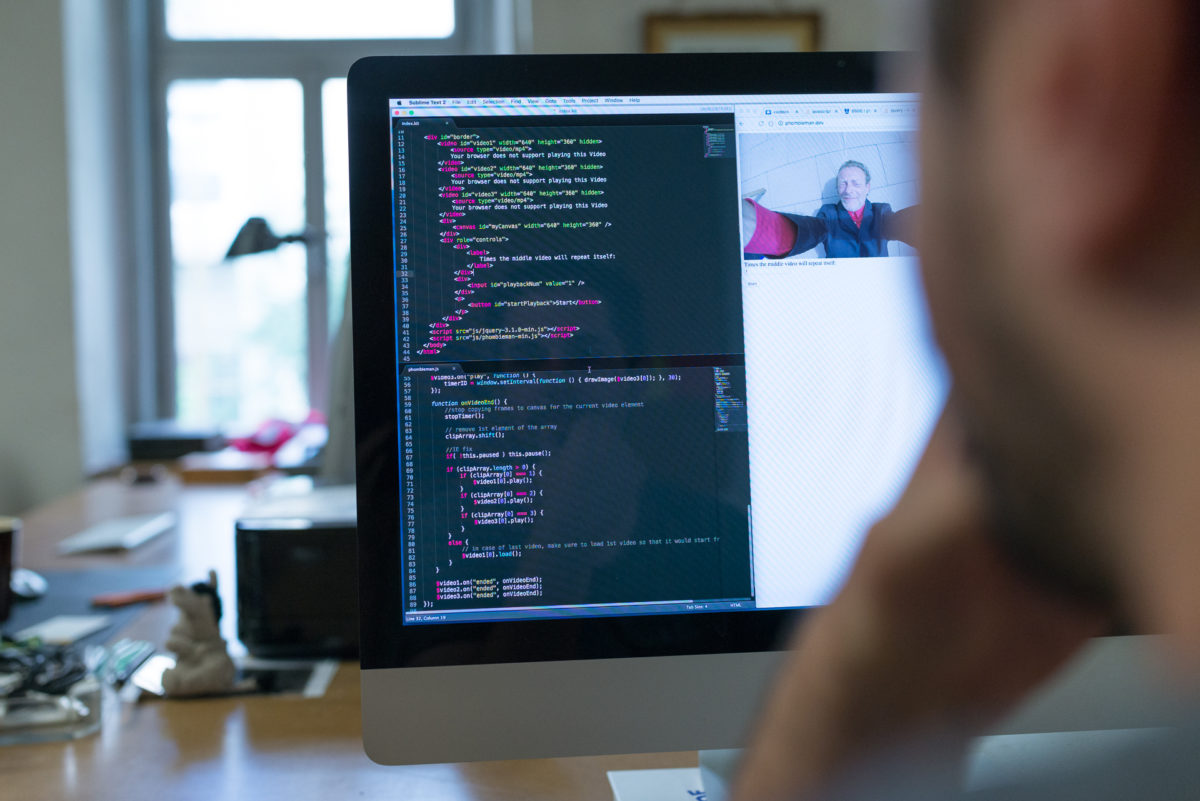 END_OF_DOCUMENT_TOKEN_TO_BE_REPLACED

I feel like this has the right to exist, for now.