It was the 4th semester of Mediatechnology and -design at University of Applied Sciences Upper Austria and we were given the task of creating a short film. I was to be directing a disasterous production with a group of five overworked students, that would haunt them for many years to come. Here’s how it happened. 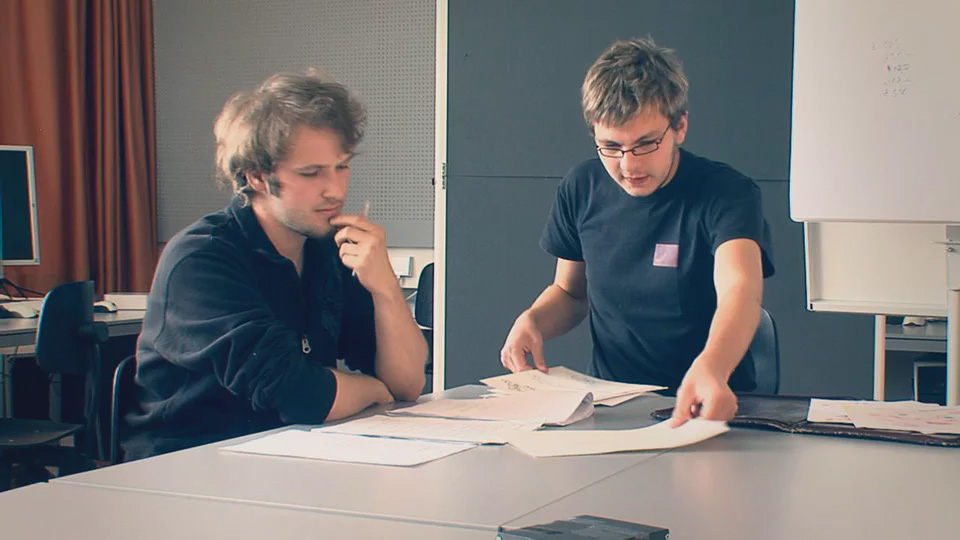 We set our goal: Make something decent, make it about something we have all experienced. So far, so good. The subject of our film would be: applying to an university, being deemed worthy and compromising your views to fit into an institution you might not really belong in. Maybe it would be more believable than school kids in suits with sunglasses, playing gangsters. Maybe, I wanted to redeem myself after Im Untergrund. Ultimately, it was one of the few right choices that were made.

Writing commenced. I’m not sure why, but we ended up letting three people write three different treatments. Which meant choosing one and discarding the others; leaving those writers pissed off for having their time wasted. They would still do their job later on, but felt like their creative input didn’t matter and would think twice about offering it again.

After many painful iterations and meetings, our script was set: It was written by myself and one of the team, whose treatment had been picked. It featured 5 main characters and some smaller roles. Finding this many actors in rural Austria would become a real challenge. In a combined effort, we asked the nearest theater groups and even around in the dorms. The location was easy: We could use many rooms of our dorm and university.

Then came the shoot. We had borrowed the camera gear, a student to play the protagonist, two young stage actors and the permission to film. We were still missing props, but we decided to just do with what we got and start shooting. I was so caught up in the logistics and shot composition, that I didn’t even prepared with the actors. Soon, our camera guys began commenting on how bad the shots looked on screen, and the performances weren’t very good. Things weren’t off to a good start.

We were dealing with a lot of scenes, a lot of characters, a lot of material to get through in very little time. There were two cameras, but no DoP. Somehow, we managed. I tried to stay on top of our shot list and the good takes. Camera and audio people were getting into their routine. Light and props were being taken care off. It began to feel like an assembly line: We were making progress, but it didn’t make the performances any less wooden or the dialogue shots any more interesting. We still had two roles to fill, so two of our crew had to step in. They saw I was overwhelmed and practiced their roles on their own. I don’t think I gave them much direction before recording. It was a lot to ask for. But we finished the scenes.

The shoot had been hard. I felt much more at home in post production, and there was a lot of it. During the shoot, our motto was “fix it in post”. A head had to be tracked onto another person for continuity, pick up shots were incomplete. I was deadling with color correction for the first time and tried to create moods for the three seperate time periods. Audio from external mics had to be manually synced to the footage. We could split up this tedious work, which was great.

In the end, somehow everyone pulled through and the project didn’t completely fail. Our short film became infamous at campus for all the troubles we had with it. At the presentation everyone eagerly awaited the scene where a head of one of the extras was digitally replaced. We even got positive feedback for basically persevering. Being so frustrated, it really was a miracle that we kept at it.

I can’t help but still feel bad for putting everyone through this, from the actors who had to suffer from a bad atmosphere and lack of guidance, to the crew, many of whom wouldn’t go back to making films for many years. I tried to make up for it after the official deadline by putting some final touches on it, making bonus features and sending everyone their own copy. But it would probably be for the best for everyone to leave this experience behind them.