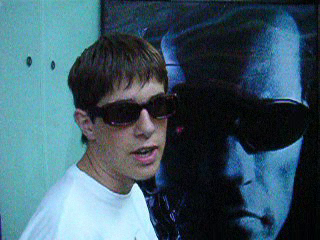 The release of Terminator 3 was a big event for my brother, cousin and I. Well, big enough to record our experience with a fancy new digital camera. Let’s go to the multiplex!

Before YouTube existed, we were already parodying a trailer by inserting our own shots, intercut with our thoughts before and after the screening. Could it have gone viral?

Shooting the epic sunglasses scene took many takes, as we burst out laughing many times.

Editing this was a really fun process. We used random test footage and were amazed at how epic it looked in combination with the narrator and sound effects of the original trailer! It all happened very spontaneous and we learned a lot.

We used Adobe Premiere (Version 6.5) for the first time and didn’t use any transition effects. Instead, we painted over some frames using Photoshop, in order to mimic the flashy transitions used in the trailer.